Lorquimur will restore the Palace of Henry IV in Segovia

THE MONUMENT WILL BE OPEN TO THE PUBLIC AFTER THE WORKS, AS ANNOUNCED BY JAVIER LÓPEZ-ESCOBAR, AND INSIDE WILL BE INSTALLED VARIOUS PANELS EXPLAINING THE BUILDING

The Department of Culture of the Regional Government of Castilla y León has awarded the”Consolidation and enhancement of the remains of the Palace of Enrique IV” project to Lorquimur S.L.with domicile in the Murcian town of Lorca, for an amount of 412,609.19 euros. The final amount will be covered 80% by ERDF funds, while the Ministry of Culture and Tourism will pay the remaining 20%.

The company must formalise the contract within fifteen working days of receiving notification of the award of the contract, which yesterday already appeared on the web page of the Meeting. Of the nine companies that submitted bids,’Lorquimur S.L.’. obtained the highest final score (17.50), according to the award criteria established in the’Individual Administrative Clauses Booklet’. Now, the Murcian limited company has a six-month deadline for the execution of the works, so if the forecasts are met, they will be completed next summer. 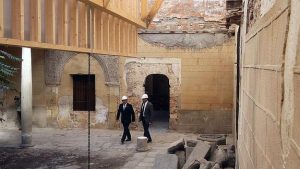 The bidding process began last September, when the Governing Council of the Board approved an investment of nearly 450,000 euros for these works, whose purpose is to preserve the existing remains of the popularly known in Segovia as Queen Juana’s Palace . The Regional Administration already carried out works on the building when it was occupied in 2006 to avoid its total ruin. On that date, the interior of the building was shored up and stabilisers were placed on the façade. Although the initial intention of the Board was to use the Palace of Enrique IV for the expansion of the Esteban Vicente Museum, the halting of this project has accelerated the progress of the deterioration of the building.

At present, the exterior and interior walls are damaged by the action of atmospheric agents, due to the lack of protection. In addition, the crowning of the walls and the pottery are severely damaged; the courtyard of the building is full of vegetation and there is a lack of rainwater drainage. As if this were not enough, the exterior scaffolding occupies the public thoroughfare, preventing adequate traffic and the view of the monument.

This situation has led to repeated requests to the Board to restore the building, such as the request made in April 2013 by the City of Segovia, with the support of the three groups of the corporation (PSOE, PP e IU).

The actions now planned are aimed at halting the process of ruining the Palace of Henry IV, ensuring the stability of the remains and recovering pedestrian traffic on the public roads currently occupied by the counterweights of the stabilisers.

On the future use of the Palace of Enrique IV, López-Escobar was in favour of “opening the sights”, in the sense of “not obsessing over a specific project”, in a veiled reference to the extension of the Esteban Vicente Museum. Along the same lines, he said that it could be used for this purpose “or for any other cultural activity that might have a place in this environment”.

The specific actions will be the elimination of the stabilizer system, as well as the existing sheet metal protection systems; the implementation of a new roofing system to protect the walls and pottery of the monument; the reinforcement of the current pottery and wall structure, by means of a new laminated wood and polycarbonate system; the replacement of existing shoring in pottery and walls; the cleaning of façades; and the protection of existing voids.